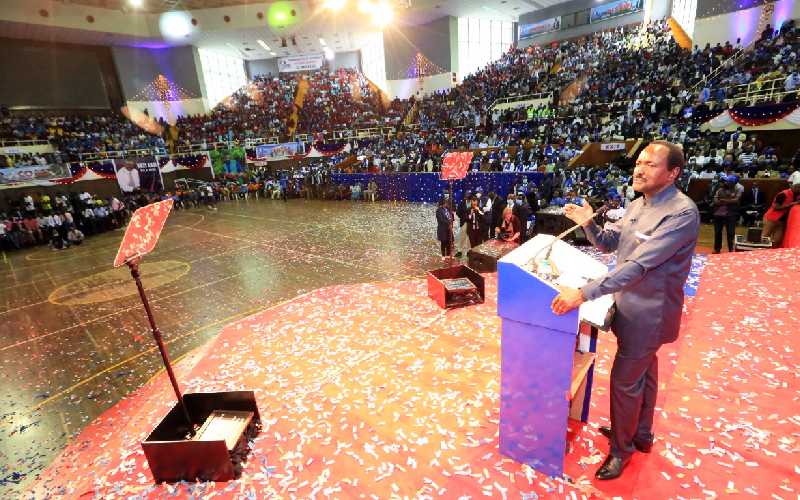 ODM leader Raila Odinga has weighed in on the possibility of working with Wiper leader Kalonzo Musyoka ahead of the 2022 general election.

Speaking at the Wiper National Delegates Conference at Kasarani, Raila said, “Our roads may meet again”.

The ODM leader was among other leaders who witnessed Kalonzo’s nomination to run for the presidency on the Wiper ticket.

In Kalonzo’s five-point agenda, he said his aim is to unify the country.

If elected President, the Wiper leader said he would push for free secondary education, which he described as a society “equaliser”.

Kalonzo said under his leadership, parents will not struggle to pay secondary school fees.

Further, the Wiper leader said he would address the huge public debt and fight corruption.

All stolen money will be returned to the public, Kalonzo added.

Raila lauded Wiper, saying it is such strong parties that make it possible for multipartyism to thrive in the country.

Gideon said Kalonzo’s ideals on unifying the country are in line with OKA’s principles. The sentiments were echoed by Mudavadi, who added that the Wiper leader’s plan to boost the economy is timely.

Raila has announced plans for a major political rally in Nairobi next month to declare his candidature in the race to succeed President Uhuru Kenyatta.

Speaking today at the Wiper NDC in Kasarani where he hinted at possibly working with Kalonzo, Raila said he will share more during the December 9 rally.

The rally will be the culmination of Raila’s nationwide “Azimio la Umoja” campaigns.

The ODM leader said he has been “seeking views and preparing his soldiers” for the 2022 political battle against his opponents, whom he said have been campaigning for the longest time.

In June, however, Kalonzo said he will not support Raila in the 2022 General Election.

Speaking to NTV, Kalonzo said he has been humiliated under the now-defunct NASA outfit together with his co-principals, and would not consider teaming up again.

The former vice president said he is getting ready for 2022 with the intention of walking away from Raila, whom he says he has deputised twice in 2013 and 2017.

“As of now, it is unthinkable that one Stephen Kalonzo Musyoka would support Raila for the third time,” he said, adding that if all fails he would rather retire and go back to his Tseikuru home.