How Sudan’s generals betrayed my era 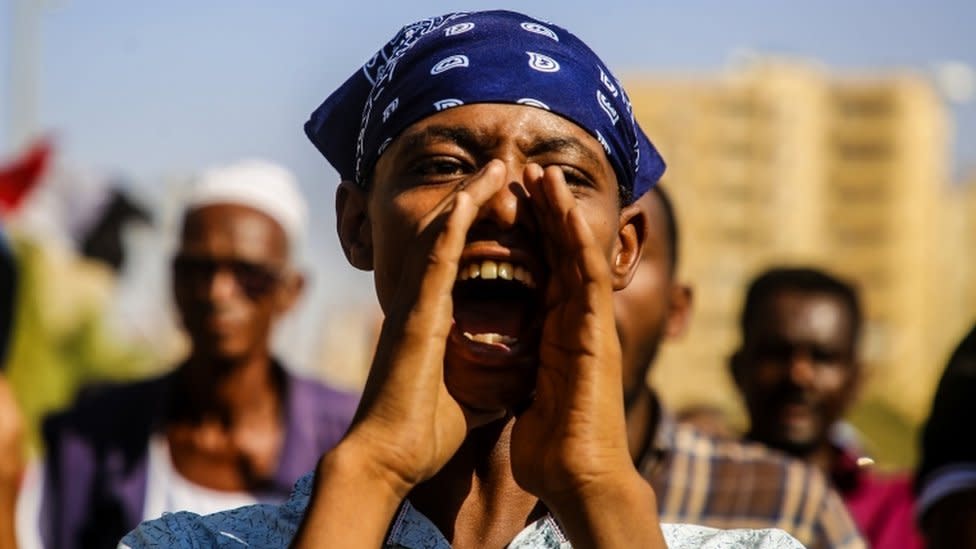 In our series of letters from African writers, former BBC journalist Mohanad Hashim – who had returned to live in Sudan after the 2019 revolution – says the hopes of many have been scuppered following the army’s recent seizure of power.

I was supposed to be flying back to Khartoum this week to continue my duties as a member of staff at the Sudan National Broadcasting Corporation (SNBC) – I had started work at the national broadcaster in August last year.

Having lived in exile since I was 19, the opportunity to go and work in a Sudan free of long-time leader Omar al-Bashir was a dream come true – answering a deep yearning to help build my childhood home.

But last month’s coup has thrown my life into disarray.

It took place when I was on leave in London to see family – and now I find myself without a job and my homeland is in turmoil as the junta tries to consolidate its grip on power in the face of mounting resistance from a pro-democracy movement.

There is a prevailing sense of betrayal among those I have managed to speak to back home.

Many Sudanese remember the massacre of 3 June 2019 at the sit-in protest site outside the army’s headquarters in the capital.

The thousands gathered were demanding that the military hand over power to civilians – the generals had ousted President Bashir two months earlier after weeks of mass protests against him.

But on that day in June, the security forces moved in on the protesters and at least 87 people were killed

There is a lingering sense of injustice two years on – and the coup is seen as the second time army chief General Abdel Fattah al-Burhan has reneged on his promises and turned against the people.

Many I know are angry at what is seen as a brazen, self-serving act by the military’s top brass.

While the takeover was not unexpected – there had been tensions between military and civilian leaders who had been sharing power since August 2019 – the timing was daring, and seen as an insult.

Only four days before the coup, millions had marched across the country in support of civilian rule – something that was featured prominently on the national broadcaster.

But on the morning of 25 October, an armed army unit took over the SNBC office in Omdurman, the city across the River Nile from Khartoum, and patriotic music was played.

Former generals and security officers took to the airwaves to justify the move, saying the measures were to rescue the revolution and correct its path.

For the next few days, two officers ran the national broadcaster. A brigadier was in charge of the TV arm and a colonel in charge of radio.

Colleagues tell me loyalists of Bashir’s old ruling party – the National Congress – have also been brought back.

They are known for their Islamist leanings and had been expelled from the corporation by the committee responsible for dismantling the Bashir regime.

Some members of staff have been suspended – accused of loyalty to the government of the ousted civilian Prime Minister Abdalla Hamdok, who remains under house arrest.

Others say they have been subjected to verbal abuse and ridicule for siding with the so-called seculars, a label used by the pro-coup voices to criticise Mr Hamdok and members of his civilian cabinet.

Editorially, all efforts to change the decades-long traditions have been rolled back: SNBC is once again the mouthpiece of the regime.

Watching Sudan TV these days, you would not notice any difference in tone from the days of Bashir.

A new studio equipped with an LED video wall – paid for by USAid to foster an open media and encourage pluralist views – is now being used by putschists to spread their propaganda.

I was part of efforts to attract Sudan’s nascent creative talent to collaborate and open the gates of the national broadcaster so it could reflect a new Sudan.

But after weeks of an internet blackout, the repression and arrest of journalists, the closure of newspapers and FM stations, the suspension of the BBC’s and RFI’s local FM relays and the enactment of laws to curb the freedom of anti-coup voices, this dream seems lost.

Yet pro-democracy activists have not given up.

In my neighbourhood in Omdurman, young volunteers run local service committees that ensure essentials such as bread, sugar and cooking gas are available.

It is these resistance committees that have become the pro-democracy movement organisers, mobilising residents in their areas.

They arrange mass demonstrations, neighbourhood rallies, vigils and erect barricades to stand against the military.

Those under the age of 30 make up around 65% of Sudan’s population – a majority of whom want their voices heard despite attempts to silence them.

Israel’s cyber protection chief: We all know who’s attacking us and we all know find out how to get even