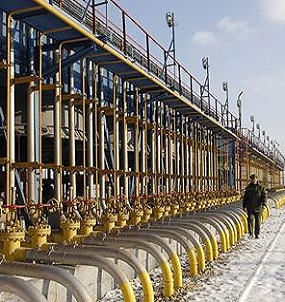 
(Bloomberg) – European natural gas jumped to a three-week high on delays in starting up a controversial new pipeline from Russia.

The German regulator said Tuesday it suspended the certification procedure for the Nord Stream 2 project because the operator of the pipeline decided to set up a German subsidiary, which will be the owner of the section of the pipeline in the country. The permitting process has been halted until assets and people are transferred to the new unit.

Benchmark European gas prices surged as much as 12% after the announcement. While it’s not clear how the move changes the timing of the permissions, it adds to bullish developments in the energy-hungry market. Many in Europe expect Russia to significantly increase supplies only when the pipeline is approved.

Adding to the current squeeze with the weather turning colder, gas flows from Norway, Europe’s second-biggest supplier after Russia, dropped by 10% on Tuesday due to an outage at the giant Troll field. China signaled it’s preparing for fuel shortages in some areas, meaning competition for LNG between Europe and Asia will remain intense.

“We haven’t got enough gas at the moment quite frankly and we are not storing for the winter period,” said Jeremy Weir, chief executive officer of Trafigura Group said at a conference Tuesday. “There is a real concern potentially, if we have a cold winter, we could have rolling blackouts in Europe.”

Fuel shipments from Gazprom PJSC have recovered after a slump at the start of this month but are still far below last year’s levels. The company signaled on Monday it has little appetite for increasing December gas volumes it transits through other territories into Europe.

“Gazprom’s reluctance to acquire short-term transmission capacity to increase or even maintain its flows across Ukraine and Poland has led to discussions on potential linkages to the possible entry into operation of the Nord Stream 2 pipeline,” the Agency for the Cooperation of Energy Regulators said in a market report published this week.

Prices have increased more than threefold this year as European inventories remain below normal after a prolonged winter last season. Besides lower Russian supplies, patchy domestic production and high Asian demand for liquefied natural gas have also contributed to the region’s energy crisis.