This Volcano Erupted For five Years Straight, And The Pictures Are Out of This World

On 24 May 1969, a deep rumbling started within Kīlauea, the largest of the volcanoes comprising the island of Hawai’i.

Those were the first moments of the historical Maunaulu eruption – a spectacular outpouring of lava that lasted for a total of 1,774 days, at the time becoming the longest Kīlauea eruption in at least two millennia.

Staff at the Hawaiian Volcano Observatory had noted that the magma reservoir underneath the tip of the volcano had started to swell, but they still didn’t expect the magnificent activity that lasted well into the summer of 1974.

So huge was this eruption that the cooling lava created a whole new landscape on the side of Kīlauea, earning the name of “growing mountain”, or Maunaulu.

In 1969 alone, twelve huge lava fountains erupted at the site, and much of this activity has been captured for posterity in glorious photographs.

In 2018, the United States Geological Survey (USGS) reminded the world of the Maunaulu eruption with a throwback photo to one of the rarest types of a lava fountain you can possibly get:

Dome fountain of episode 10, October 10–13, 1969, eruption of Kilauea Volcano. This dome fountain is about 20 m (65 ft) high. Symmetrical dome fountains such as this are rare. #Tbt #HI @Volcanoes_NPS pic.twitter.com/sKSQaVINKs

Usually, lava just explodes all over the place without any rhyme or reason, making this beautiful, perfectly rounded dome fountain all the more special. (By the way, the foreground is not the ocean, as it might seem at first glance – it’s a landscape of cooled lava.)

Here’s another version of the photo, taken on 11 October 1969. The original tweet notes its height at roughly 20 meters (65 feet), but according to USGS records, at some point the fountain may have towered as high as 75 meters (246 feet):

Lava fountains, in all their blazing glory of raw exploding geology, can reach the dizzying heights of 500 meters, according to USGS.

They typically happen when lava shoots out of an isolated vent or a fissure in the volcano, or when water in a confined space gets inside a lava tube.

And, if you like this photo, Maunaulu certainly produced more incredible scenery.

On August 15 of 1969, there was this little splatter of boiling hot rock, just 8 meters (26 feet) high but shaped rather like a searing mushroom cloud. At that point in the eruption, activity like this was almost constantly happening at Maunaulu:

One of the most spectacular events during the eruption were these 100-meter high ‘lava falls’ overflowing the ‘Alae Crater on Kīlauea, on 5 August 1969.

“For the two seasoned observers who witnessed this awe-inspiring event, nothing else matched it during the entire Maunaulu eruption,” USGS writes on their website. 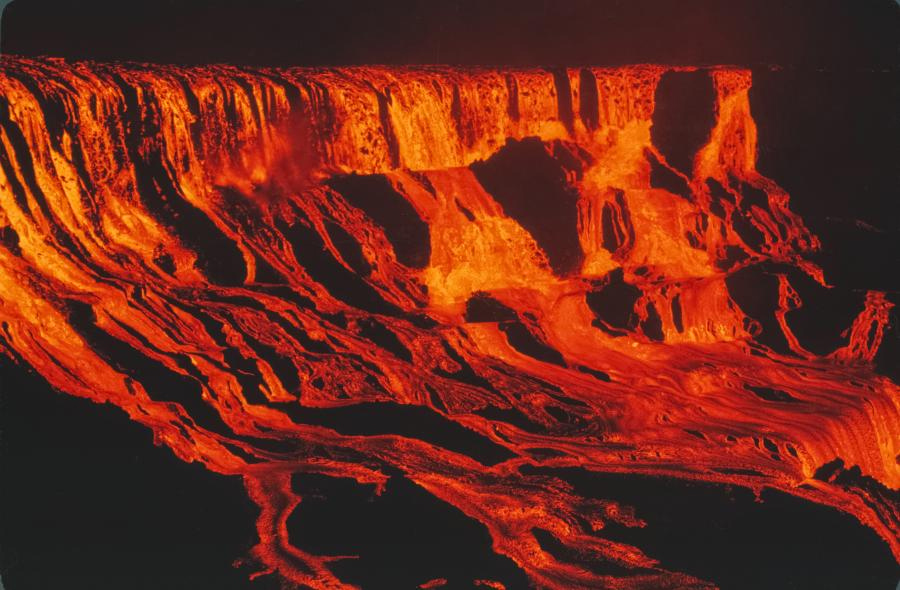 Even after that stunning event, Kīlauea was far from done inspiring awe in its observers. Another massive lava fountain shot up in the air on October 20, and in this photo you can even see a geologist standing on a viewing platform about 800 meters (2,625 feet) away.

Despite the considerable distance, observers still had to hide behind a stone wall as the heat was so intense – sometimes dry grass right next to the platform would even catch fire. 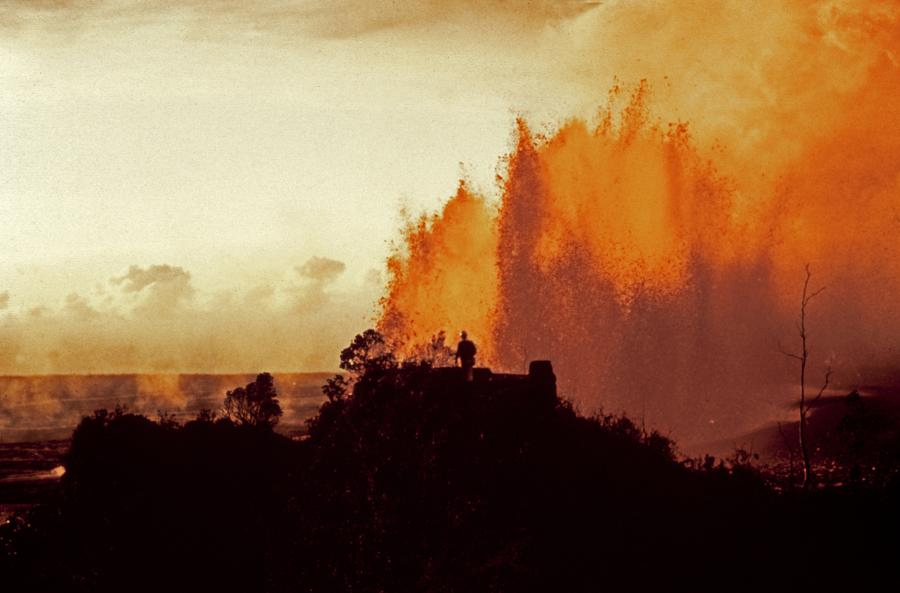 What’s particularly wild is that’s not even the longest continually active volcano on our planet. According to Guinness World Records, this honor belongs to Mt Stromboli in Italy, that’s been going since at least the 7th century BCE.

You can see the full gallery of the picturesque Maunaulu eruption on the USGS website.

A version of this article was originally published in April 2018.