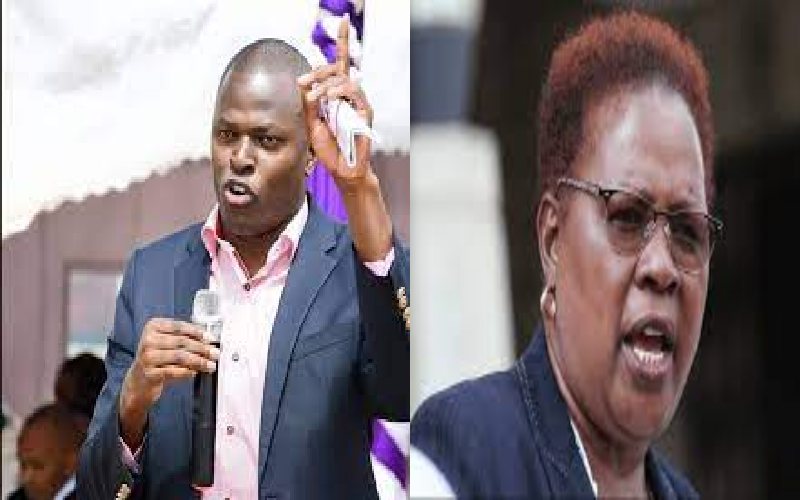 Deputy President William Ruto’s political allies have trained their guns on Raila Odinga days after the DP’s tour of Kisumu was briefly disrupted by a stone-throwing mob and the subsequent response by Odinga on the same.

Ruto’s motorcade was stoned in Kondele, Kisumu, during his Nyanza tour after which the ODM leader categorically distanced himself from the chaos, telling Kamba FM stations he was not childish as to organise such a thing.

During a church service at Africa Christian Church and Schools in Kangari, Murang’a County, legislators allied to the DP hit out the ODM leader.

While addressing congregants, Kandara MP Alice Wahome said Raila was not recognised by the Constitution of Kenya 2010.

“According to the constitution, we elected him (Ruto) as the second in command, number one is President Uhuru. I wonder what seat he holds in the country apart from being the party leader of ODM,” Wahome said.

Further, she condemned the violence witnessed in Kondele last Wednesday, urging their political competitor to bring forth their agenda to the voters and shun sponsoring chaos at the expense of their opponents.

Her Counterpart from Kiharu, Ndindi Nyoro, also took a swipe at the Kondele unrest, saying that no provocation will change their objectives as a political outfit.

“One thing you need to keep in mind is that stones will not be counted on the day of the election, only votes will be counted. Let us not use youth to disrupt our competitors’ political events,” Nyoro told the congregation.

He invited the One Kenya Alliance to join the ‘Hustler Nation’ alleging that the OKA principals would be discarded any time from now.

“Kalonzo Musyoka and Moses Wetangula come from humble backgrounds; they are hustlers. You are used to being controlled and abandoned every time. They are about to throw you out,” Nyoro added.

According to him, this was a response to a section of lawmakers affiliated with the OKA who had threatened to leave the alliance if its presidential candidate will not be named by December.

Ruto ended his three-day tour of the Lake region on Thursday, after touring Kisumu, Homa Bay and Migori Counties.

While addressing the incident hours later, the ODM leader distanced himself from the allegations that his political team masterminded the chaos.

“I don’t want to be part of any propaganda. Ruto is a Kenyan who is free to tour any part of the country. I am not a small person to organise chaos for an opponent,” he told Citizen TV.

According to Police spokesperson Bruno Shioso, the DP’s team had been warned beforehand of possible chaos citing unrest and tension in the area.