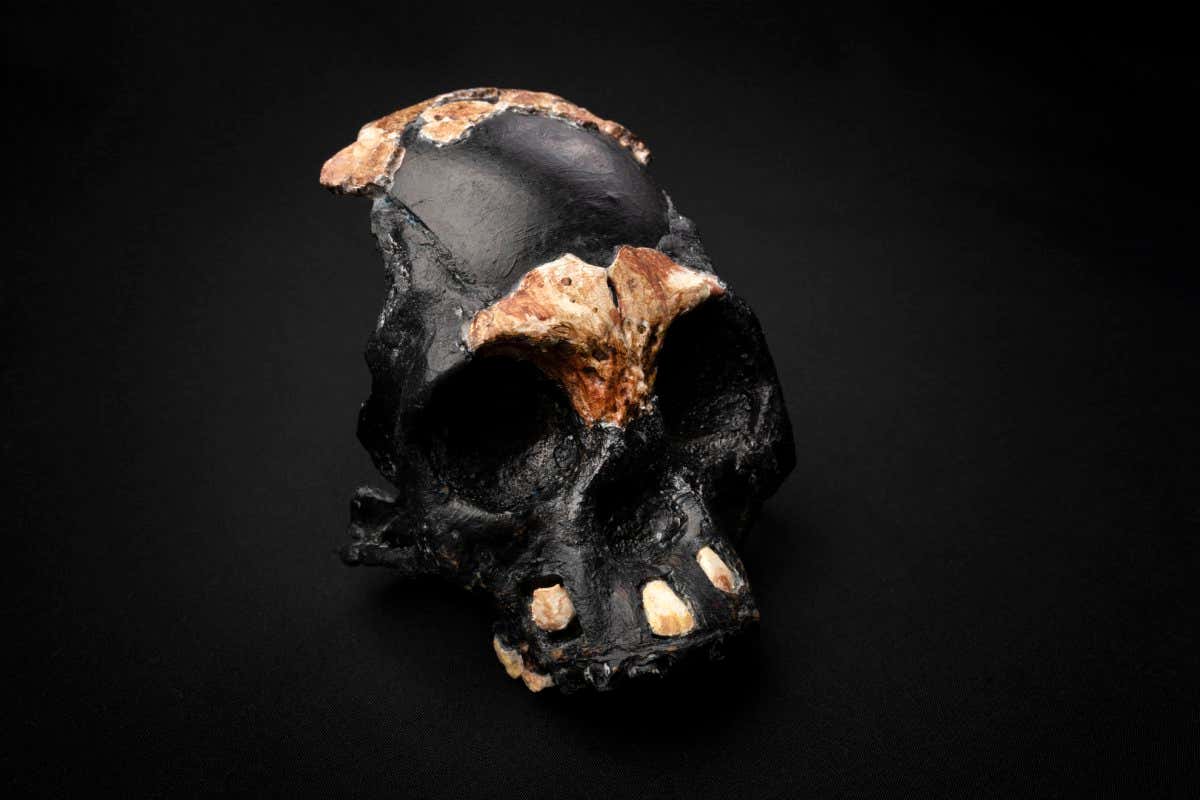 The skull of a small child belonging to a different human species has been found deep in a cave system in South Africa. The team that made the discovery have named it “Leti” and believes the skull shows that the Homo naledi species buried their dead.

Leti’s skull was found in a narrow fissure that is almost impossible to access. For that reason, the team argue that the skull was placed there deliberately, as a form of funerary practice. They say it is evidence that hominins have been performing funerary rights for hundreds of thousands of years – even hominins with brains much smaller than ours.

“We can see no other reason for this small child’s skull being in the extraordinarily difficult position,” says Lee Berger of the University of the Witwatersrand in Johannesburg, South Africa.

Berger and his colleagues have been exploring the Rising Star cave system in South Africa for several years. In 2015 they described Homo naledi, a new species of hominin, from the caves. Over a thousand bones were found strewn over the floor of the system’s Dinaledi Chamber, which could only be reached by expert cavers able to fit through small spaces. H. naledi had some features that resembled modern humans, but in other respects it looked like an older species: in particular, its brain was small.

Two years later, the team found a remarkably complete H. naledi skeleton in another part of the cave, the Lesedi Chamber. They called the individual “Neo”. Crucially, the team also managed to narrow down how old the H. naledi remains are. They are only about 250,000 years old, meaning they existed at the same time as our species and other big-brained hominins like the Neanderthals – yet they retained features from species that lived millions of years earlier.

In September 2017, the team was exploring deeper parts of the cave, beyond the Dinaledi and Lesedi Chambers.

Marina Elliott of Simon Fraser University in Burnaby, Canada was one of the researchers who went in. The distance is not great: “It’s about 12 metres from where the Dinaledi material was originally recovered in 2013-14.” But the journey is claustrophobically challenging.

Elliott had to first go through a room dubbed the Chaos Chamber. “There’s boulders that have fallen from the ceiling,” she says. “Then there’s a little bit of a drop into a crawlspace that just literally leads into a couple of small narrow passages.” These passages are only tens of centimetres across, so the researchers had to turn sideways and even partly upside-down to get inside.

In one such passage, about 20cm across and 80cm tall, the researchers found a small ledge. Sitting on the ledge were 28 fragments of skull and six teeth.

When the team got the remains back to the surface, they realised they probably belonged to one individual. They named the individual “Leti”, from the Setswana word “letimela” meaning “the lost one”.

The team has now described Leti, and the surrounding caves, in two papers. Two of the teeth were milk teeth and four were adult. The adult teeth were not worn, suggesting they had only recently emerged from the gums. Based on this evidence, “Leti was probably somewhere between 4 and 6 years of age,” says Juliet Brophy of Louisiana State University in Baton Rouge.

Leti is probably about the same age as the other H. naledi remains, says Tebogo Makhubela of the University of Johannesburg in South Africa. “We are assigning the age based on the similarity of the geology in all these chambers,” he says.

Right from the start, Berger has suggested that the H. naledi bones were placed there deliberately, by other H. naledi, after they died. “I think it’s fair to say it was controversial in 2015 to say a small-brained, primitive-looking hominin might have been deliberately disposing of its dead,” he says. But, he argues, “there’s been no credible evidence against that original hypothesis.”

The discovery of Leti, even deeper into the cave system, adds to the evidence, Berger argues. On this reading, Rising Star is a H. naledi grave.

Other potential explanations seem unlikely, argues Darryl de Ruiter of Texas A&M University in College Station. “There’s no indication of any carnivore activity: no tooth marks, no gnawing, nothing like that.” That means it’s unlikely other animals carried the bones into the caves. “There’s no indication that there’s a large-scale water movement depositing these things.”

There is evidence that Neanderthals buried their dead as early as 70,000 years ago. They had larger brains than H. naledi, though. There is also evidence that other animals grieve – from apes and monkeys to orcas and elephants – but no evidence of them carefully placing bodies in caves or other burial sites.

How might H. naledi have carried the remains of their dead so deep? “Our geologists are fairly certain that these deep areas of the the cave have always been in the complete dark zone,” says Steven Churchill of Duke University in Durham, North Carolina. He says cavers sometimes come across living baboons in the cave, seemingly feeling their way around. “Which is probably a terrifying experience,” he adds. Conceivably H. naledi did the same.

Alternatively, they may have used fire to light their way. “There are bits of charcoal in the cave, but nothing we’ve been able to firmly associate with the hominins,” says Churchill. But controlled fire use goes back 400,00 years, at least in Europe. Churchill says “it wouldn’t be surprising” if H. naledi could make flaming torches to light their way.

Sign up to Our Human Story, a free monthly newsletter on the revolution in archaeology and human evolution.