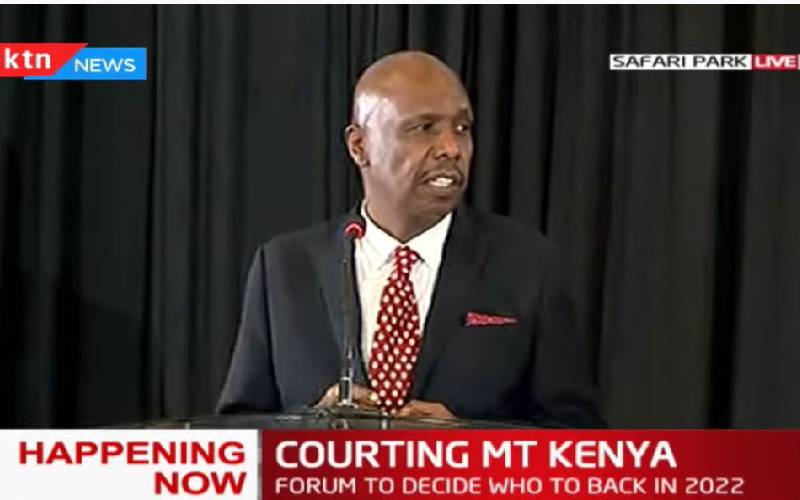 
Kanu chairman Gideon Moi has said he is the best-placed One Kenya Alliance principal to lead Kenya.

Speaking when OKA met the Mount Kenya Foundation, the Baringo senator said the alliance is open to working with any front runners in the race for State House.

He cited tax policies, which he said in Kenya are currently unpredictable. Gideon said it is this unpredictability that has led to expensive animal feed and high fuel prices.

Gideon went on, adding that no economic model matters if the right people are not in leadership positions.

He further called for unity, saying if Kenya is not careful in the run-up to the polls and even during the elections, it would be easy to slip and go the Rwanda way.

Gideon made a comeback in 2013 where he whitewashed his opponent Rev Jackson Kosgei with over 80 per cent of the total votes cast, winning the senatorial seat.

The senator’s journey to the presidency is at its peak.

In his own words, Gideon said there is much he needs to do for the people not only in Baringo but for the whole country. Ready to take the bull by its horns, the senator said he is ready for the consequences in the new journey.

Lawyer Gordon Ogola, a member of Kanu’s National Executive Council, said the race to the top seat needs someone like Gideon.

“Gideon is a pedigree son of this country and his upbringing is properly anchored in politics, he has what it takes,” he said.

Further, Ogola says the Baringo Senator should not be seen as a passing cloud, adding that he has the right qualification to go for the top seat.

The OKA principals have collectively pledged loyalty to President Uhuru Kenyatta, but each bear ambitions to succeed him.

According to insiders, the group will eventually meet President Kenyatta to present its preferred presidential candidate.

The meeting comes a week after Baringo Senator Gideon was endorsed at the National Delegates Conference at Bomas of Kenya, Nairobi last week to run for presidency.

So far, from the alliance, Kalonzo, Mudavadi and Gideon have declared interest in the presidency.

Tracking and monitoring motor vehicles is not new to Kenyans. Competition to install affordable tracking devices is fierce but essential for fleet managers who receive reports online and track vehicles from the comfort of their desk.

For a period of Earth's history, between roughly...
Online Jobs

In July, TikTok earned itself a fair amount...