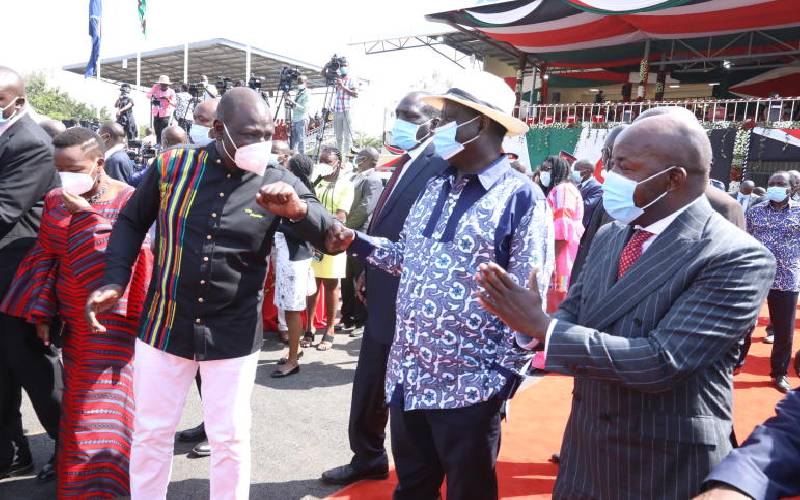 
ODM leader Raila Odinga has ruled out the possibility of working with Deputy President William Ruto in a political arrangement ahead of next year’s General Election.

Speaking during an interview on five Kalenjin vernacular radio stations in Nairobi, yesterday, Raila said it would not be easy for him to seek alliance or a coalition with Dr Ruto, with whom he worked in the 2007 elections.

“I am ready to work with anyone. The last time you gave him (Ruto) to me, we worked together well but he choose to walk out on me,” said the former premier.

Recalling his days in the former President Kibaki’s grand coalition government where he was appointed the Prime Minister after the 2007 disputed presidential elections, Raila said he gave Ruto a plum job but he decided to leave.

The DP served then in the Agriculture and Higher Education dockets.

“The Ministry of Agriculture was one of the biggest jobs given to us in that coalition government, I gave it to Ruto but he left,” Raila said during the interview that lasted for one hour.

“I am still ‘arap Mibei,’ of 2007- If you (the Kalenjins) give me another person, I will work with him. I have no problem working with anyone else. He (Ruto) has a habit of running alone,” he added.

The ODM leader said he respects the DP’s decision to seek the presidency and succeed President Uhuru Kenyatta, saying just like many other presidential aspirants, he is allowed to meet the people and sell his policies.

“Ruto is in the race. He has been running alone since 2017. He has a right to go for the presidency, so are many others like (Kalonzo, Gideon Moi, Musalia) and the rest,” Raila responded when asked if he would be comfortable to work with Ruto.

He dismissed claims that he was planning to enter into a coalition agreement with One Kenya Alliance (OKA) leaders Wiper’s Kalonzo Musyoka, ANC’s Musalia Mudavadi, Senator Gideon Moi and Ford Kenya’s Moses Wetangul’a- with the sole aim of locking Ruto out of the race to succeed Uhuru.

“I am not entering into a coalition to stop Ruto, no. There are many others who have declared to vie for the presidency in 2022. I am still consulting with Kenyans before I make my decision,” he said.

The ODM leader is popularising his “Azimio La Umoja” agenda, which has given him a chance to build partnerships with communities and leaders with mutual political and economic interests.

Yesterday he promised to make his position known after completing the town-hall engagements later in the month.

Ruto was a member of the Pentagon in the 2007 elections under ODM which was captained by Raila and deputized by Mudavadi.

Recently the DP has changed his position about working with Raila after he had earlier indicated that he was ready to work with him.

Ruto has been of the view that his hustler movement and ODM were the only strongest political forces in the country, and he wouldn’t want to imagine how politics will look like if they teamed up.

“When I see Raila Odinga, I see my competitor in 2022. From where I sit, Raila is the most formidable opponent that I have in 2022 and I do not know how the politics of Kenya would look like if we teamed up,” he said.

“If Raila will not be my competitor, who will be my competitor? Because from where I sit, the two strongest forces we have politically are the Hustlers and the ODM team on the other side,” he told KTN during an interview a few months ago.

The issue of sworn political enemies working together in an election is not new in the country.

The DP is a harsh critic of Raila and is believed to be one of his major threats should he decide to contest the presidential seat in the 2022 general election.

Over the past months, Raila and Ruto have been engaged in a heated exchange over the Building Bridges Initiative (BBI) that was rejected by the courts.

While the ODM leader advocates for a referendum to foster unity in the country,  the DP was of the view that it was not time to tinker with the Constitution and that issues raised by the BBI proponents could be addressed through parliamentary initiative and not a referendum.

Kalonzo, has also declared that he will not support Raila for the presidency come 2022 after they ran on a joint ticket in 2013 and 2017.

In an interview with the media in June, he said he would be “the most stupid person on earth” to endorse Raila who was his co-principal in the National Super Alliance (NASA), for the third consecutive time.

The Wiper leader has accused the ODM leader of betrayal and causing the fallout in the NASA coalition which brought together Kalonzo, Mudavadi, Wetangula, and governor Isaac Ruto (Chama Cha Mashinani).

Kalonzo has maintained that any political negotiations he will have with Raila would be done under the newly formed OKA as equal partners.

Recently the former NASA principals were at Bomas of Kenya in Nairobi where the Kanu National Delegates Conference declared Gideon the party’s presidential candidate.

President Uhuru has been pushing for the four to form a formidable political outfit that would field a joint presidential candidate.