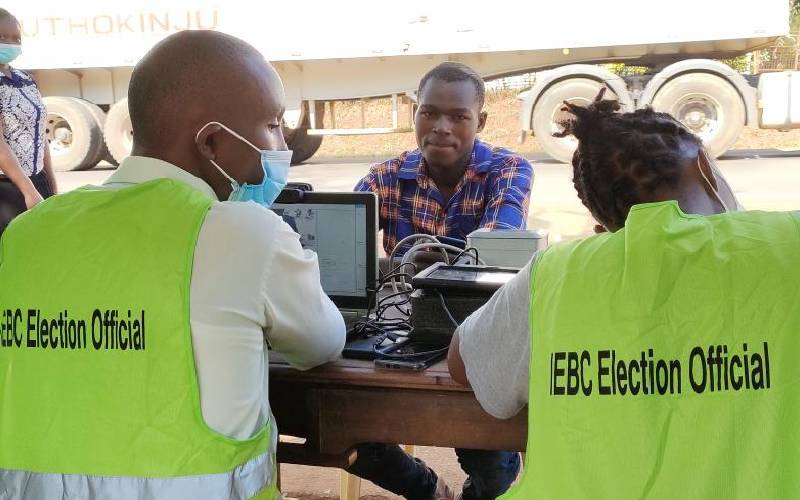 
The smooth running of the 2022 General Election depends on whether the Independent Electoral and Boundaries Commission (IEBC) is aptly funded.

This is the message that the electoral commission chair Wafula Chebukati keeps drumming with the hope of it reverberating across the top leadership echelons, and influence the disbursement of the billions for election preparations.

The commission is agitating for the release of Sh40.9 billion to fund the electoral processes but the Treasury only released Sh26 billion. And for the voter registration exercise, the commission asked for Sh4 billion but the state has only provided Sh1.2 billion – a move that triggered a push and pull between the Treasury, Parliament and the commission.

But a crop of leaders feels indifferent about IEBC being showered with more money and are demanding that it makes due with the small purse atop its “kilt.”

Led by Kieni MP Kanini Kega, who is also the Finance and budget committee chair, they say that IEBC already has more than enough to conduct the first phase of the mass voter registration exercise since it had already purchased election material hardware for a similar purpose during the 2017 General Election.

Kega said that his committee and the Justice and Legal Affairs Committee (JLAC) would be meeting with IEBC next week to scrutinise an itemized budget for justification on why they need to get more funding for the exercise.

“We will not have an extension for this month’s voter exercise as we have no funds. The money available will be used to purchase covid-19 vaccines and other essential services,” he said.

Uasin Ngishu Governor Jackson Mandago however came to the defense of the commission, urging the state to prioritise resource allocation, especially during the election cycle.

He said in his county, for instance, the electoral agency was targeting 160,000 votes but all this would be a mirage should the funding be inadequate.

“We cannot as a nation afford to frustrate an election process. We are asking Parliament and the Treasury to allocate sufficient resources to IEBC. If the commission is not going to be able to conduct this election, then you are going to put this country into problems,” said Mr Mandago.

“We would rather have free, fair, and credible elections in this country and deal with the construction of roads later than have poor elections that will only spell doom for this country,” he said.

The governor cautioned the Treasury and Parliament against the late release of funds that would affect preparations by the commission given time constraints.

“If the commission does not get funding on time and the election process does not go smoothly then people will blame IEBC for no reason. The commissioners will be suffering for their current lack of resources,” said the county boss.

IEBC’s election manager Nairobi county, Eroo Mele, assured that the elections would be conducted despite the voter registration being dogged by low turnout and inadequate funding.

“IEBC has conducted elections ever since it was constituted by the new Constitution and I do not see any reason whatsoever why we will not conduct the elections numbers notwithstanding. As far as the budget is concerned it is my boss (Chebukati) who negotiates for the same and our work as foot soldiers on the ground is to ensure that elections take place,” said Mele.

Previous articleAmasa to combine IoT know-how on its crypto micro streaming revenue app with IoTeX » CryptoNinjas
Next articleHidden Forest Has Been ‘Trapped in Time’ For 100,000 Years, Scientists Say
City
Commodites