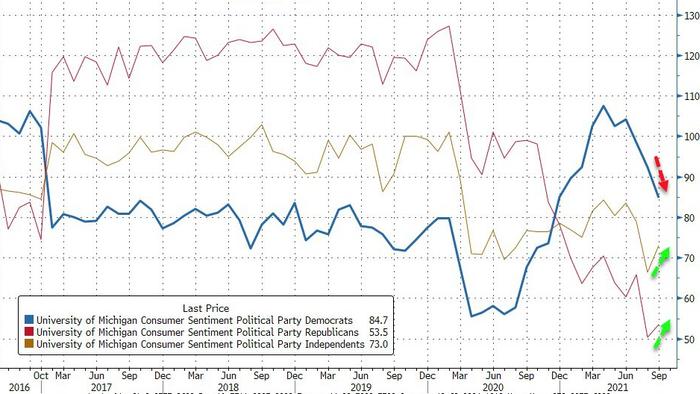 Victoria has experienced its deadliest day of the...
Read more
Politics


Following August’s unexpected collapse in confidence, analysts expected a modest rebound in headline sentiment from the University of Michigan survey, and they were barely right. UMich rose from 70.3 in August (10 year lows) to 71.0 in preliminary September data (but that was below expectations of a jump to 72.0).

Interestingly, it was only Democrats that saw sentiment fall in early September, as Independents and Republicans rebounded…

The report said the declines were due to complaints about high prices.

The delta variant of the coronavirus has damped consumer sentiment and led economists to downgrade their forecasts for third-quarter growth as economic activity slows. Concerns about rising prices have also led to a deterioration in confidence in recent months.

“Although declining living standards were still more frequently cited by older, poorer, and less educated households, over the past few months, complaints about rising prices have increased among younger, richer, and more educated households,” Richard Curtin, director of the survey, said in a statement.

Consumers’ longer-term outlook for the economy declined to a decade low, the report showed.

UMich’s Richard Curtin noted that “some observers anticipated that the early August plunge in confidence would quickly disappear since it was driven by emotions.”

However, as today’s ugly data shows, Curtin notes that “a more accurate reading is that consumers correctly assessed the economic impact of the resurgent Delta variant.”